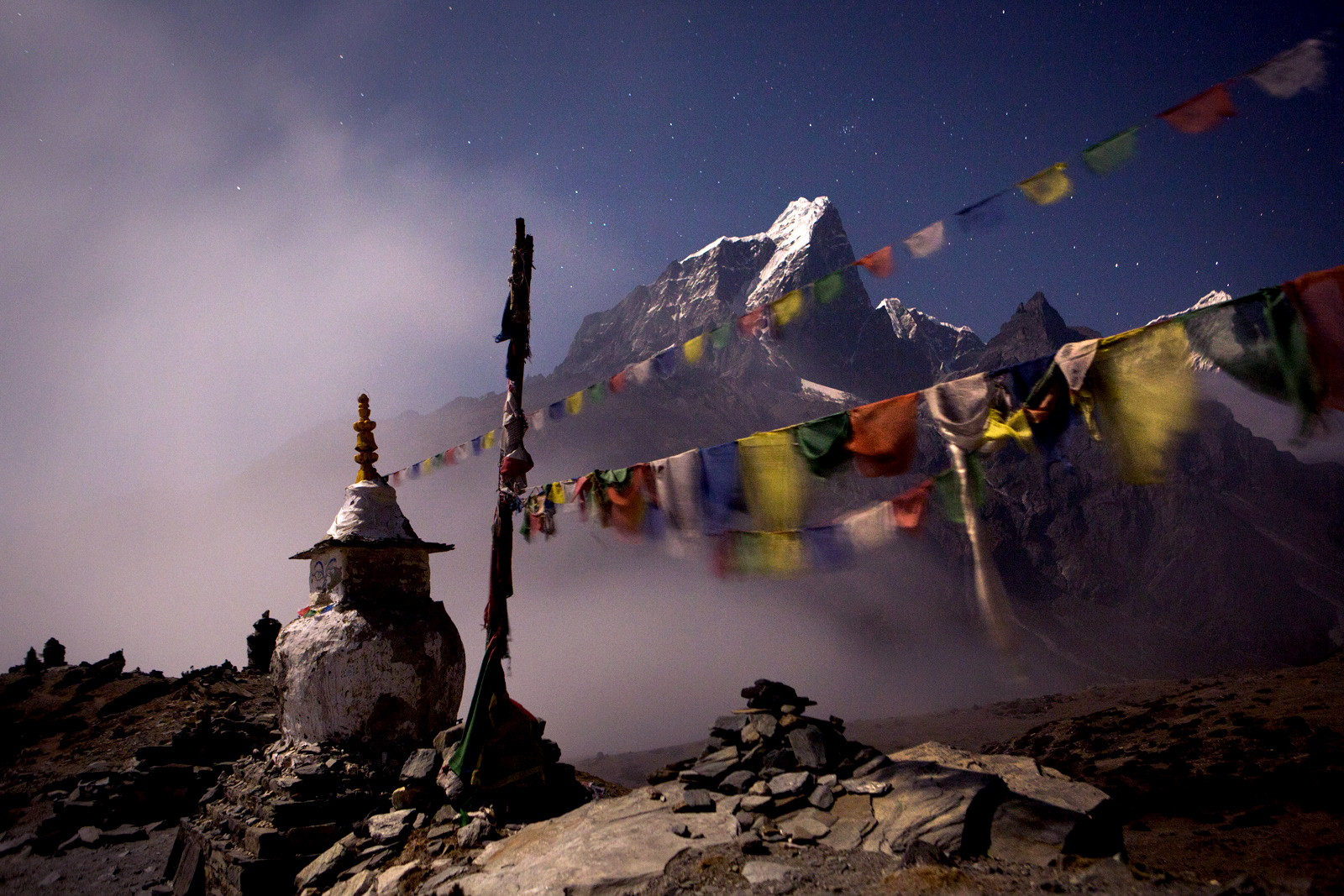 Forbidden Mustang, formerly the Kingdom of Lo has been attracting many travelers to its remote kingdom. It is located in the North of the Annapurna region and the Western part of Nepal. The volley is remote and looks ethnically Tibetan. It is a region of medieval times, ancient cave hermitages, Tibetan Buddhist monasteries, arid high desert, wild rock formations and soaring snow peaks.Mustang became part of the Yarlung Dynasty of central Tibet, and in the fifteenth century, the independent Kingdom of Lo was founded. It was only incorporated into the Kingdom of Nepal in 1951. Soon afterward, renegade Khampa freedom fighters battling the Chinese used Mustang as a base of operations and was closed to all Westerners until 1992.

Today, trekking to this region requires special trekking permit and is only possible with organized treks. However, for many people, the cost is more than justified by the chance to explore this high desert region that has far more in common with Tibet than with Nepal. The brown landscape, jagged peaks, and mud-walled villages remind us of what Tibet must have been like before the Chinese invasion.The elevation of the trails rises from 2815 meters to 4270 meters above sea level. So trekking to this port does not require any technical experience; all you need is to be in good physical condition and you should be able to hike for 6-7 hours over hilly terrain. Then you have the opportunity to go to an area where only Just a few trekkers have been before. Thanks to this isolated position, the people of Mustang have been able to keep their indigenous lifestyle and heritage intact.

Unique location of the Bon religion in Nepal, Cave Civilization, Himalayan view of Annapurna and Dhaulagiri, Home of Thakali and Thakuri.

In the morning your guide will pick you up to go to the tourist bus station and drive (approximately seven hours with breaks) through beautiful river views and Nepalese countryside to reach Pokhara lakeside. There you check in at the hotel and you have time to explore the surrounding lakeside areas and stay overnight at hotel.

The flight takes about 25 minutes, then you trek from Jomsom to Kagbeni (2810 m.) which takes another four hours. You take the spectacular early morning flight to Jomsom. After some initial preparation of loads and logistics, you begin your trek to the beautiful village of Kagbeni, Just out of Jomsom you cross a suspension bridge and then walk along the riverbank of the Kali Gandaki, The trail is quite barren with craggy rocks and sand and is mostly flat, which makes it very easy to walk. It is also very picturesque, with views of big peaks all around such as Dhaulagiri, Tukuche and Nilgiri, and in the south the entire Annapurna Massif can be seen. Kagbeni provides you with a taste of scenes to come in Upper Mustang, with its narrow alleyways and tunnels, irrigation canals, green fields of wheat and barley and a large red gompa. Stay overnight at camp in Jomsom.

Day 03: Trek from Kagbeni to Chele

Our Journey starts following the riverbank of Kaligandaki up stream. During the walk we have scenic picturesque places to stop through the sandy and windy trails. This trail is up and downhill. First we reach Tangbe village with narrow alleys amongst white washed houses, fields of buckwheat, barley, wheat and apple orchards. From there we trek forward to Chhusang and after crossing the river head up to the huge red chunk of conglomerate that has fallen down from the cliff above, forming a tunnel through which the Kaligandaki follows. We head on to reach Chele village.

Day 04: Trek from Chele to Syanbochen

Today, we walk further to Eklo Bhatti. We climb to Taklam La Pass (3,624m/11,923 ft) through plateau and narrow stretches with views of Tilicho Peak, Yakawa Kang and Damodar Danda. Descending to the village of Samar we then Climb the trail that goes above Samar village to the ridge then descending steeply to a stream. Another 3 hrs similar walk takes us to Syanbochen. On the way, we relax surrounded by cool streams and juniper trees. Locals use the dried leaves of Junipers as incense to invite and start any auspicious work. We also pass by the famous Ramchung Cave.

Today we take a gentle climb upward through the fields of barley and then more steeply to Nyi Lo (Nyi Pass), the southern boundary of the Kingdom of Lo. Our descent brings us into the town of Charang with its large monastery teetering on the edge of the Kali Gandaki Gorge.

Day 06: Trek from Charang to Lo-Manthang

Today, we trek to Lo-Mangthang with a magnificent view of Nilgiri, Tilicho, Annapurna I and Bhrikuti peak. Th^ail first descends to Charang Chu Canyon and climbs steeply after crossing the river. Further on the trail ascends gently to the 3,850m windy pass of Lo, from where you can see the Lo-Manthang Valley. While descending to Lo-Manthang, views of the walled city appear magnificent with its hills on the Tibetan Border.

Today we explore the surrounding areas and visit Namgyal Gompa and Tingkhar. Namgyal Gompa, which is situated on a hilltop serving as an important monastery to the local community. After visiting Namgyal Gompa we continue the tour to Ti ngkhar, which is the last main village of the northwest of Lo-Mangthang. You also have another option to visit the Tall Champa Lakhang "God house" the red Thugchen Gompa, Chyodi Gompa and the Entrance Hall which are the main attraction of this town. Another attraction is the four- storey building of the Raja's palace as well as the surrounding panoramic views of the Himalaya.

We head out over pasture land and cross the Charang Khola to the isolated village of Gekar and Ghar Gompa. Our walk leads us over hills and through green valleys to the village of Ghomi with its cluster of buildings surrounded by fields.

Day 10: Trek from Ghami to Samar

Today we climb up to Nyi La pass before heading down to Samar, a picturesque settlement surrounded by poplar trees. This is a stopping point for mule and horse trains carrying supplies to the remote villages of this kingdom.

Day 11: Trek from Samar to Kagbeni

Our trek today takes us bock to Kagbeni, where we exit the restricted area of upper Mustang. Overnight in Kagbeni.

Day 12: Trek from Kagbeni to Jomsom

Today our trek is short as we Just head back to Jomsom and a return to civilization.

Day 13: Fly from Jomsom to Pokhara and Overnight in Pokhara

Day 14: Drive From Pokhara to Kathmandu

In the morning we'll drive back through the scenic countryside. The bus will stop for breakfast and lunch. It takes 7 hrs bock to Kathmandu

Your safety is of paramount concern whilst traveling with Himalayan Trailfinder. Please note that your leader has the authority to amend or cancel any part of the itinerary if it is deemed necessary due to safety concerns. Every effort will be made to keep to the above itinerary; However, as this  is adventure travel in remote mountain regions, we cannot guarantee it! Weather conditions, health condition of a member, unexpected natural disasters etc, can all contribute to changes in the itinerary. The leader will try to ensure that the trip runs according to plan, but please be prepared to be flexible if required.

Enquiry About This Trip